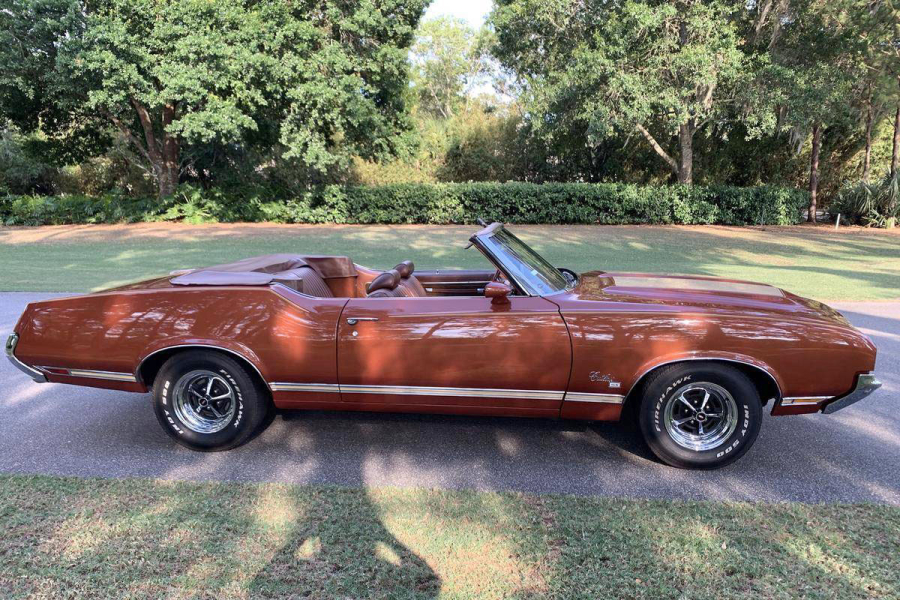 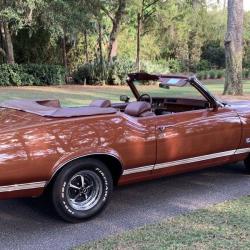 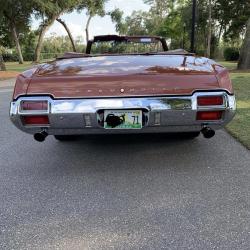 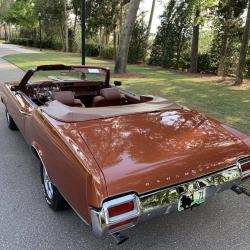 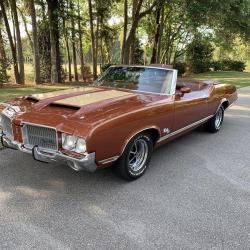 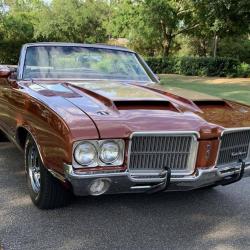 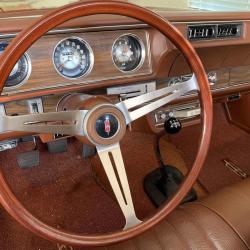 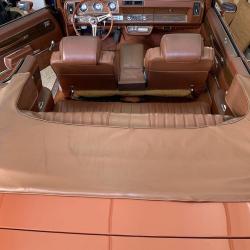 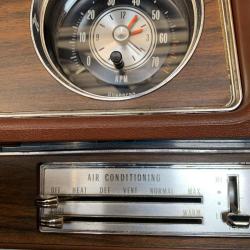 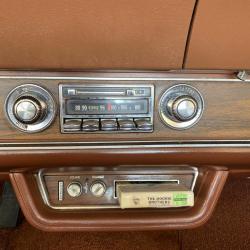 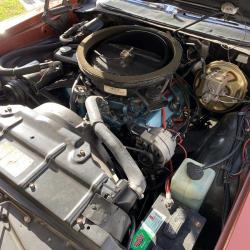 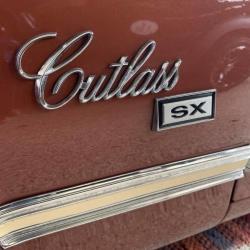 For 1970 and ‘71, the Hurst/Olds was suspended from production, leaving Oldsmobile with the 4-4-2 as their only performance machine. Not a bad car to have, but Olds wanted to offer customers more, so they introduced the Rallye 350 and the upscale SX, both using the same Cutlass Supreme body as the 4-4-2 in keeping with the overall mid-size performance theme. Whereas the Rallye 350 brought a sort of entry-level option to buyers, the SX tried to fill the shoes of the H/O as the “Gentlemen’s Hot Rod”, with luxury appointments, a roster of options, and of course the massive 455ci V8 under the hood. The SX fit the bill well, but it didn’t have the racy pizzazz the H/O brought to the program, although for some, that made it perfect. It was subtle, quiet, unassuming, and unexpected – in other words, very Oldsmobile. But, like the H/O, it could turn in ¼-mile specs that terrified cars half its weight. The SX muscles bulged beneath its casually conservative exterior with a 442-style scooped hood with stripes, Rallye Wheels, rear bumper with exhaust cutouts, and special ‘SX’ badging. The SX largely emphasized comfort over racy flash but it could move with the best of them. The interior was only slightly enhanced over the standard Cutlass Supreme, which is to say, unless you were a diehard Olds fan, it might go wholly unnoticed. 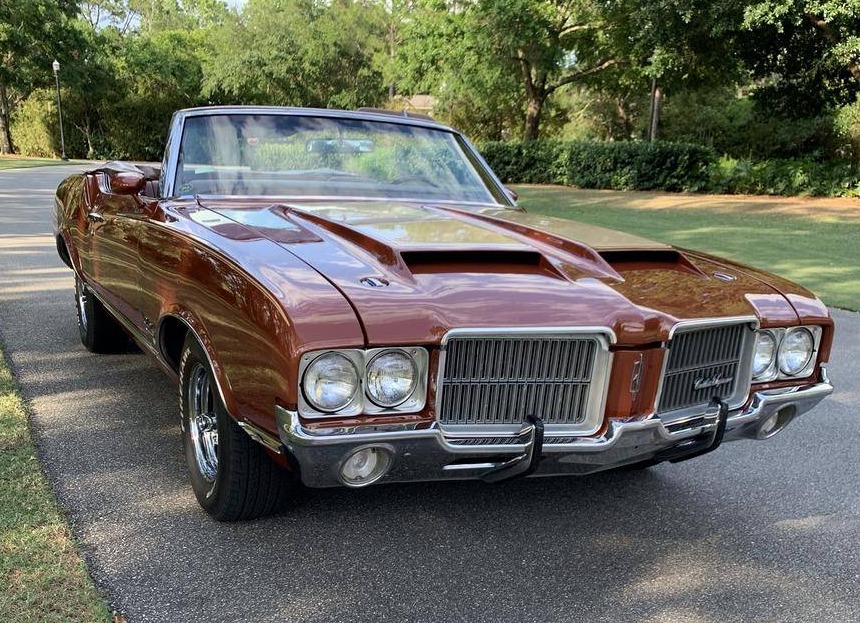 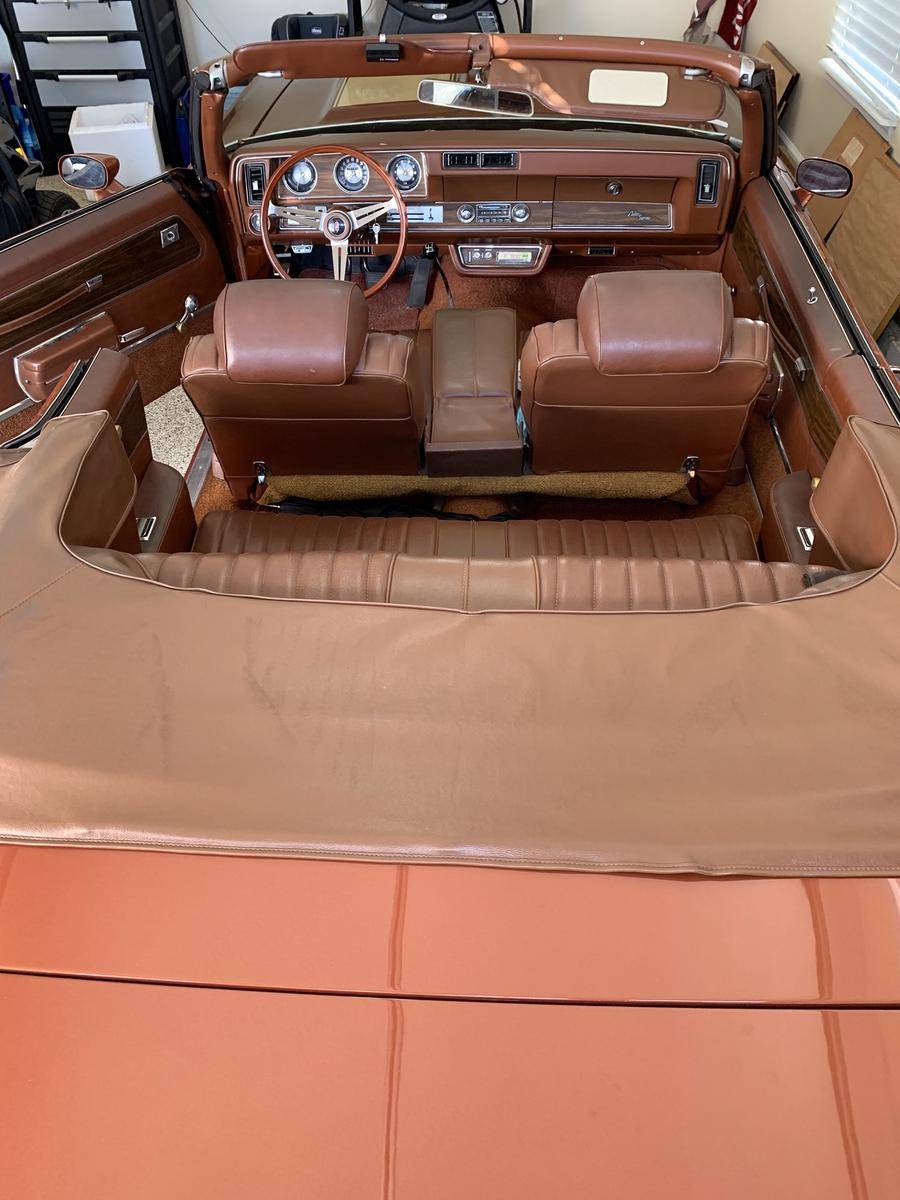 This one is very nicely equipped – it’s a convertible, which is cool, but it’s also got air conditioning, which is another nod to how Oldsmobile loved to treat their customers well. It has an AM/FM 8-track stereo system, a bench seat with a center armrest and high backrests, twin sport sideview mirrors, clock-in-tach, power steering and power brakes. A 4-speed manual transmission was a no-cost option that replaced the standard automatic transmission, and this car has the three-pedal row-your-own, which is an absolutely necessary feature for a lot of us. The interior is a very comfortable place to be, with wall-to-wall carpeting, pearlescent brown upholstery, wood applique on the dash and doors, a three-spoke wood-rim sport steering wheel, and acres of legroom. Outside, the car is finished in a medium copper-brown and the hood scoops feature golden-brown stripes – the whole scene is absolutely stunning! Where so many muscle cars are flashy, in-your-face ordeals screaming about how powerful and crazy they are, a muscle car like this one, exhibiting restraint and dignity all the while knowing full well it could mop the track with pretty much anything that challenges it, is really refreshing. Just 7,197 SXs were built in 1970, and 2,177 were built in 1971. All things told, the SX is a very rare car, and we can only imagine the number of convertibles is roughly only ¼ to 1/3 of overall production. Being a fully restored example, the interior on this one looks fabulous, the paint is gorgeous, the body seems to be without mentionable flaw. What’s not to love? 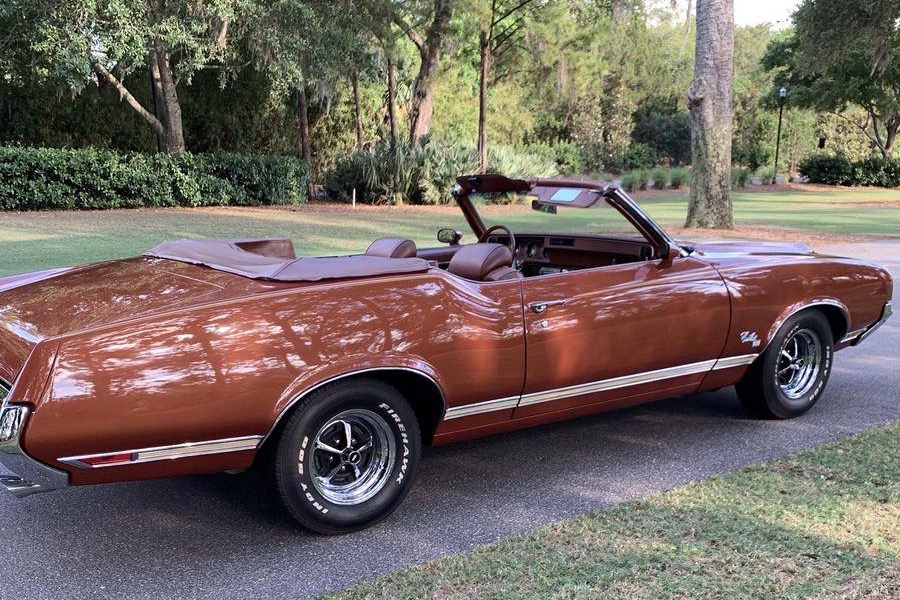 This car is presented well and looks to be in really nice condition. Trying to restore another one to this degree would likely cost quite a bit more and include headaches that accompany any restoration job. Why take the labor pains when you just want the baby? It’s a rare car that’s equipped with exceptional options, such as the color, 4-speed, and big block 455ci V8. It’s ready to rip apart the dragstrip and yet exudes the impression of a casual cruiser that a middle-aged executive might use to take his wife out to a posh restaurant for dinner. On top of that, it’s probably comfortable enough that she wouldn’t object, and she likely would have no idea that the handsome cruiser is actually a brown boulevard brawler. Based on comps, we say it’s fair market (maybe even well bought), and finding an SX is no easy task, let alone a droptop 4-speed. This car is a treasure!