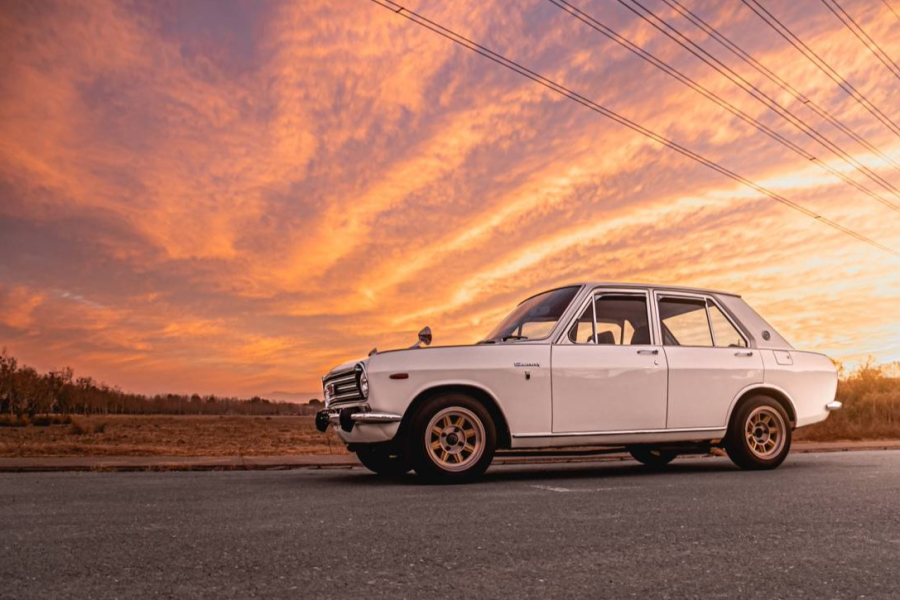 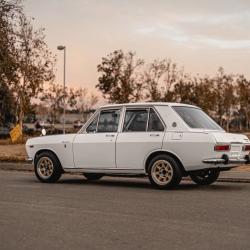 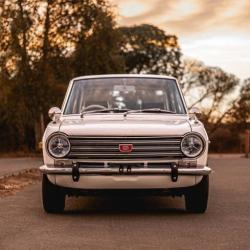 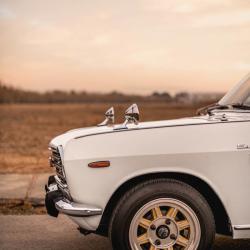 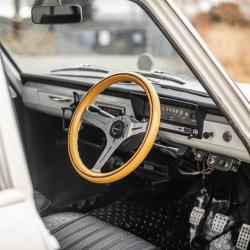 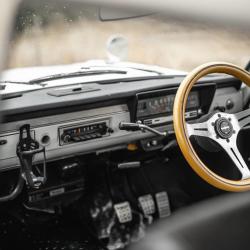 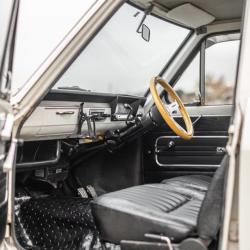 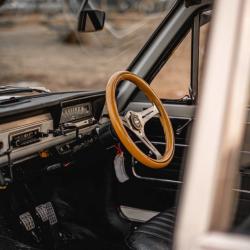 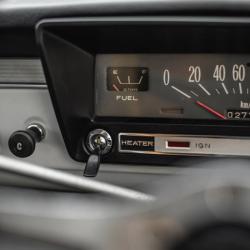 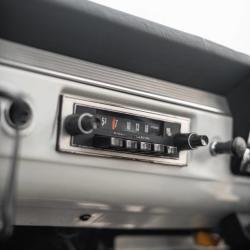 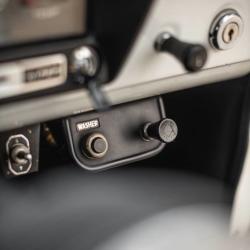 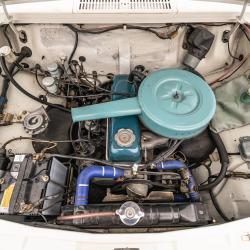 This thing is cute as a button! We would love to pick it up and put it in our pocket. The adorable moniker was chosen by a national mail-in ballot, how cool! Much better than its alias, “Datsun 1000”, a painful reminder of the limited displacement of the powerplant. Speaking of the motor, the longitudinally mounted inline 4-cylinder seems fairly proportional, and combined with the rear-wheel-drive layout and leaf sprung rear-end, the Sunny-D is reminiscent of other offerings of the era – think MGB GT. Though Sunnys were offered with 4-speed manual transmissions and floor shifters, this one is rockin’ “three on the tree”. As if driving on the right side of the car wasn’t enough! Considering it isn’t a powerhouse, at least the engagement and entertainment levels will be sky high. The dashboard controls are the antithesis of modern rides, the single toggle switch for heater operation being a standout. Car stereo nerds, check out the Nissan / Clarion branding on that factory radio. Don’t let the Porsche people have all the fun comparing their Blaupunkts and Beckers! 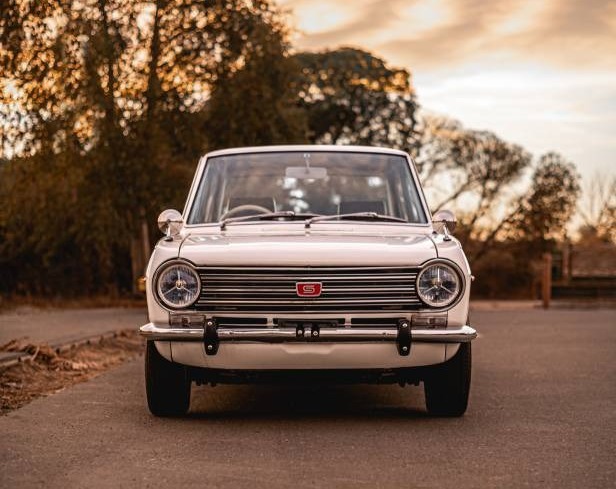 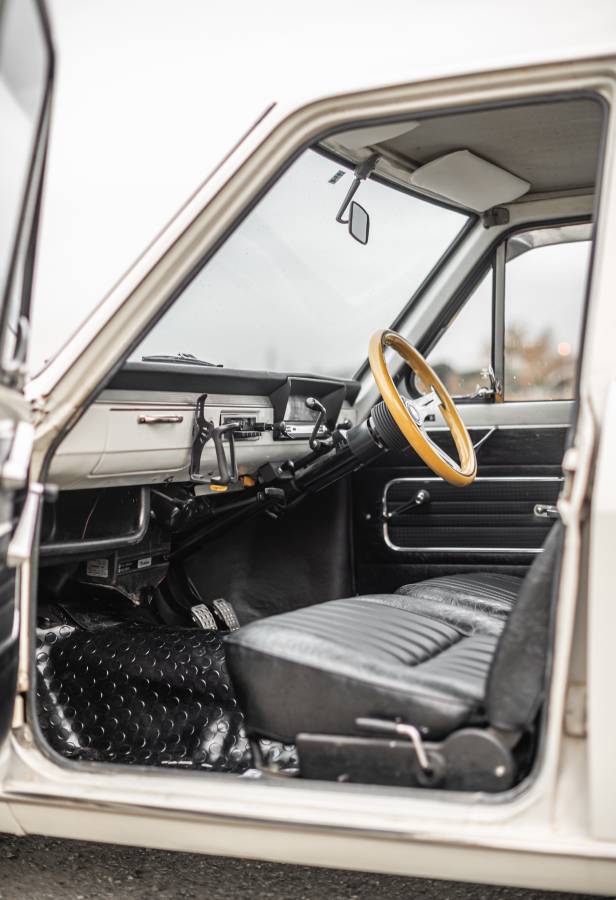 Aside from the factory standard features, this example has been massaged a bit. Look closely at the creative cup holder installation on the glove box repurposing a standard bicycle water bottle cage. At least we know it didn’t add too much unnecessary weight! Another modification is the sporty three spoke wood rimmed steerer. Without a power assisted rack, the smaller diameter wheel may be a chore for weaklings, but with an overall curb weight of 1,500 lbs, even the daintiest of physiques should still be able to play pilot. Another place the light weight will help is in the braking department, where 4-wheel drum brakes are fitted. No slotted and drilled rotors for this JDM monster! That didn’t stop the prior owner from upgrading the wheels to tasteful aftermarket alloys shod with low-pro Toyos. All for the sake of go-kart like handling, we’re guessing. The only other noticeable mods include the aluminum pedal covers and the blue silicone coolant hoses. Not even the classics can escape the tuners’ attention these days. To be fair, these are all minor tweaks that could be easily reversed. Who knows, maybe the next owner will want to put a chandelier or something in it. Or is that just an LA thing? 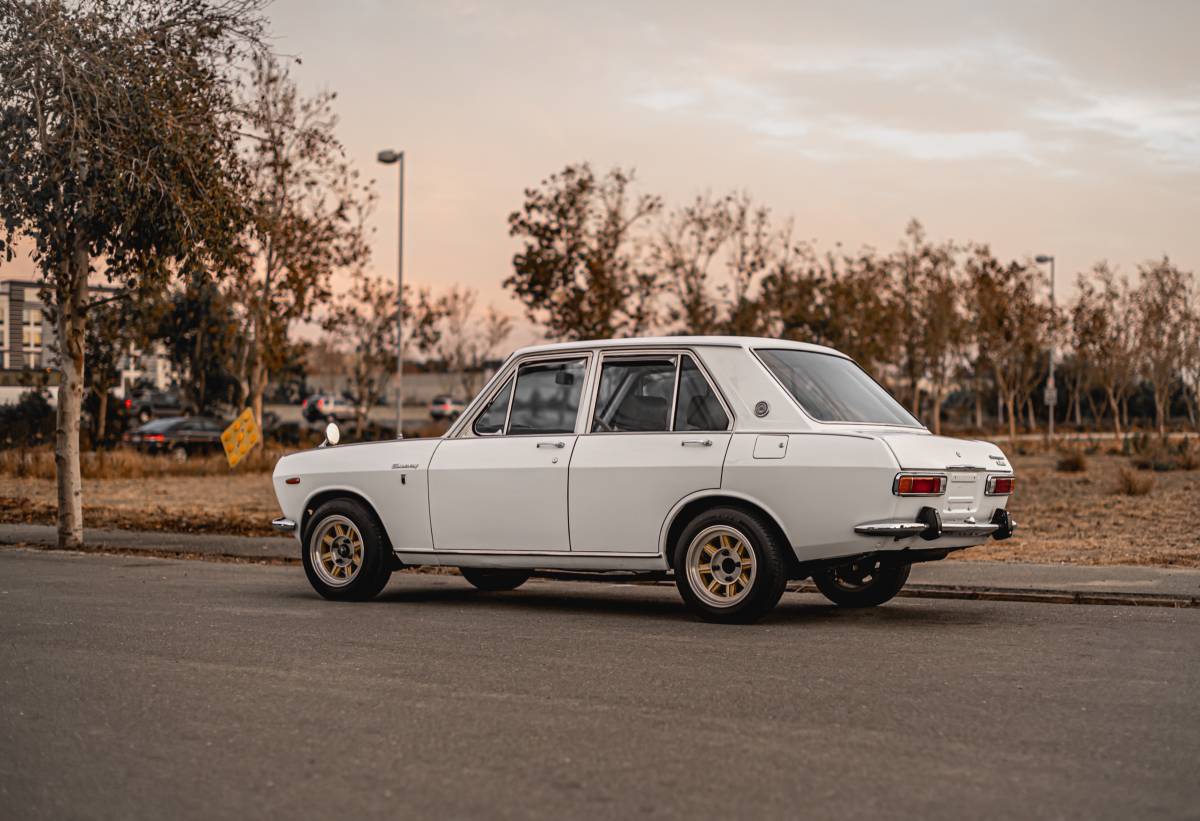 You can imagine values on a car like this would be tricky to pin down. Having the import duties, expenses, and hassles out of the way is a big deal here, and any overseas comparable examples should take that into consideration. That said, if this Bay Area gem is your jam but still a little too mild for your tastes, consider this one shipped to your nearest port for about $500 more. Our subject is original enough to maintain the factory design integrity with adequate interesting enhancements to improve the driving experience. Noteworthy Japanese classics are currently coming into their own, including stuff not normally seen in North America. This vehicle is also the prequel to what came later, the B210, the Sentra, giving fans a history lesson in a tangible material form. Considering the mileage, condition, and the ability to find another, we’ll call this one fair-market for the right buyer. We really do have to respect our elders.